Basically we have 3 types of Software,

UNIX systems also have a graphical user interface (GUI) similar to Microsoft Windows which provides an easy to use environment. However, knowledge of UNIX is required for operations which aren’t covered by a graphical program, or for when there is no windows interface available, for example, in a telnet session.

The C programming language is used for developing,

C++ is an object-oriented programming (OOP) language that is viewed by many as the best language for creating large-scale applications. C++ is a superset of the C language.

A related programming language, Java, is based on C++ but optimized for the distribution of program objects in a network such as the Internet. Java is somewhat simpler and easier to learn than C++ and has characteristics that give it other advantages over C++. However, both languages require a considerable amount of study.

Java is a Programming Language and a Platform 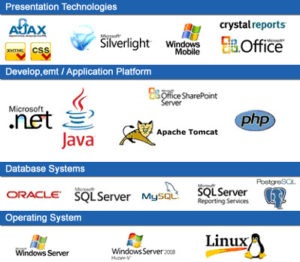 The .Net framework is a software development platform developed by Microsoft. The framework was meant to create applications, which would run on the Windows Platform.

The framework also supports various programming languages such as Visual Basic and C#. So developers can choose and select the language to develop the required application.

Microsoft SQL Server is a relational database management system developed by Microsoft. As a database server, it is a software product with the primary function of storing and retrieving data as requested by other software applications—which may run either on the same computer or on another computer across a network (including the Internet).

Oracle database is a relational database management system. It is known as Oracle database, OracleDB or simply Oracle. It is produced and marketed by Oracle Corporation.

Python is an interpreted, object-oriented programming language similar to PERL, that has gained popularity because of its clear syntax and readability. Python is said to be relatively easy to learn and portable, meaning its statements can be interpreted in a number of operating systems, including UNIX-based systems, Mac OS, MS-DOS, OS/2, and various versions of Microsoft Windows.

10) What is Software Testing?

Software Testing can be done in 2 ways,

i. Manual Testing: Testing Computer and or Mobile Software manually without using any Test Tool or Test Script….

SAP stands for Systems Applications and Products in Data Processing.

SAP by definition is also named of the ERP (Enterprise Resource Planning) software as well the name of the company.

SAP Software was Founded in 1972, SAP system consists of a number of fully integrated modules, which covers virtually every aspect of the business management.

Other Competitive products of SAP Software in the market are  Oracle, Microsoft Dynamics etc.

A Web Service is can be defined by following ways:

ii) Web Service is a method of communication between two devices over network.

iii) Web Service is a software system for interoperable machine to machine communication.

iv) Web Service is a collection of standards or protocols for exchanging information between two devices or application.

Data science, is an interdisciplinary field about scientific methods, processes, and systems to extract knowledge or insights from data in various forms, either structured or unstructured, similar to data mining.