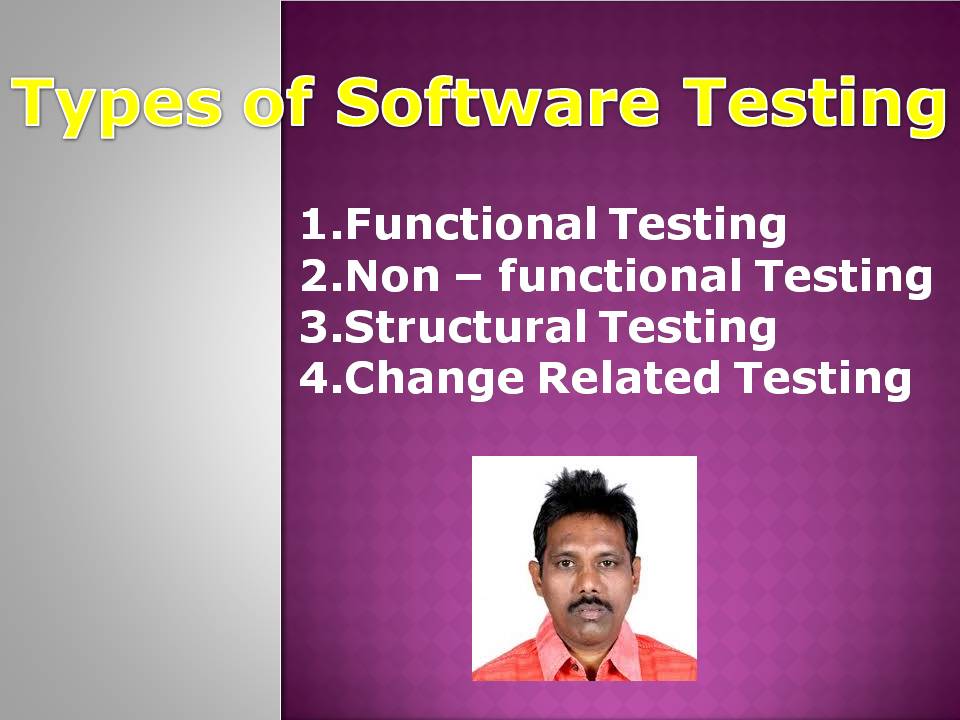 A Test type is a group of test activities aimed at testing specific characteristics of a software system, or a part of a system, based on specific test objectives. Such objectives may include:

• Evaluating Functional quality characteristics, such as completeness, correctness, and appropriateness.

• Evaluating whether the Structure or architecture of the component or system is correct, complete, and as specified.

• Evaluating the Effects of changes, such as confirming that defects have been fixed (confirmation testing) and looking for unintended changes in behavior resulting from software or environment changes (regression testing).

Functional Testing of a system involves tests that evaluate functions that the system should perform.

Functional tests should be performed at all test levels (Unit testing, Integration testing, System testing, and Acceptance testing), though the focus is different at each level.

Functional testing considers the behavior of the software, so black-box techniques may be used to derive test conditions and test cases for the functionality of the component or system.

Functional test design and execution may involve special skills or knowledge, such as knowledge of the particular business problem the software solves (e.g., online banking software for the banking industry).

Contrary to common misperceptions, non-functional testing can and often should be performed at all test levels, and done as early as possible. The late discovery of non-functional defects can be extremely dangerous to the success of a project.

Black-box techniques may be used to derive test conditions and test cases for non-functional testing. For example, boundary value analysis can be used to define the stress conditions for performance tests.

Non-functional test design and execution may involve special skills or knowledge, such as knowledge of the inherent weaknesses of a design or technology (e.g., security vulnerabilities associated with particular programming languages) or the particular user base (e.g., the personas of users of healthcare facility management systems).

White-box test design and execution may involve special skills or knowledge, such as the way the code is built, how data is stored (e.g., to evaluate possible database queries), and how to use coverage tools and to correctly interpret their results.

When changes are made to a system, either to correct a defect or because of new or changing functionality, testing should be done to confirm that the changes have corrected the defect or implemented the functionality correctly, and have not caused any unforeseen adverse consequences.

Confirmation Testing:
After a defect is fixed, the software may be tested with all test cases that failed due to the defect, which should be re-executed on the new software version.

It is possible to perform any of the test types mentioned above at any test level.