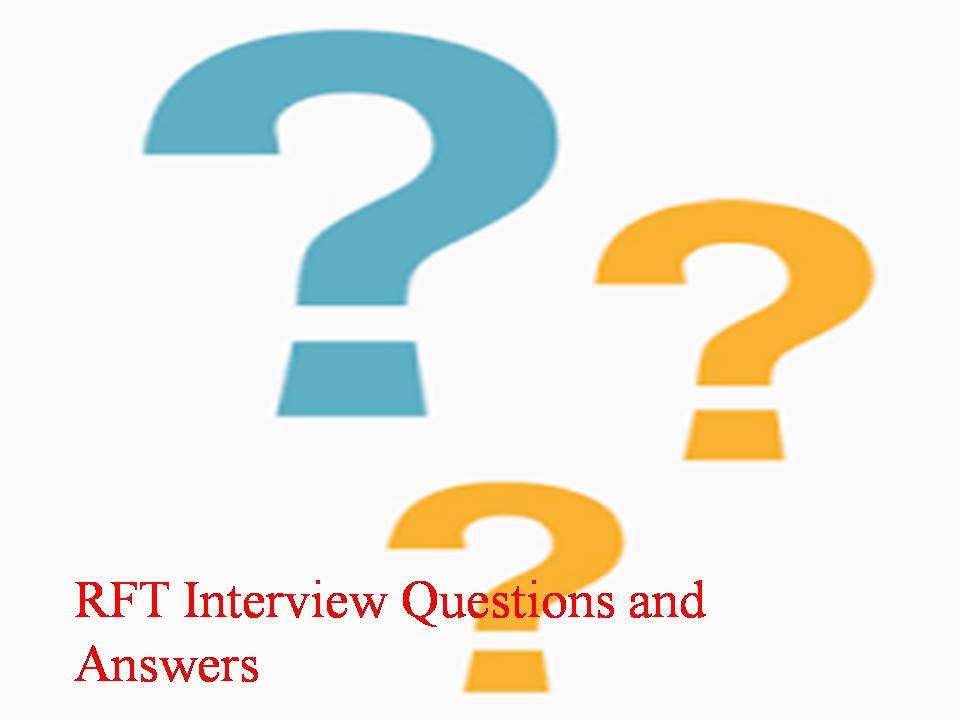 RFT Stands for Rational Functional Tester, It’s an IBM Product.IBM’s Rational Functional Tester is most powerful next generation functional-testing and automation tool from Rational and is based upon object-oriented technology. Due to its extreme simplicity & robustness, it is in great demand all across the industry involved in Application Development & Testing.
It is an Automation Testing tool used for Automation and regression testing.

2) What is the use of Rational Functional Tester? Explain.

3) What is the process of test automation by using Rational Functional Tester?

4) For how many development platforms & Languages Functional Tester is available?

5) How to identify various objects by Rational Functional Tester?

6) What is the purpose of a test object map in Rational Functional Tester?

• At the time of recording the script, the test object map is created, while the application is under test.
• Test Object Map provides a brisk way for adding objects to a particular script.
• Test Object Map provides the list of test objects that are available in the application.
• A new Test Object Map can be created by basing on existing map or by adding the required objects.
• A TOM contains certain properties for every object.
• Recognition information can be updated, thus scripts which are using the object map are able to share the information.

7) In how many ways we can test the applications on Linux using RFT?

• First Way: We can record a script on Windows Environment and export it to Linux & then play it back on Linux.
• Second Way: By writing scripts using the Test Object Insert tool. Instead of creating an object map through recording we populate it outside of the recorder by opening the map and selecting objects in the test application.
• We can insert verification points without recording, by opening the Verification Point wizard from the Script Explorer.

8) What are two types of Test Managers in RFT?

9) What are the differences between Rational Functional Tester and Rational Robot?

10) What is a Rational and Functional Test project?

11) What are the benefits of associating Functional Tester project with Rational Project?

12) What is the use of associating a project with Test Manager in RFT?

13) How data driven testing is useful in RFT?

14) What are the verification methods?

15) Are there any restrictions when we disassociate a project from the current rational project?

• IBM RFT Proxy SDK allows extending user interface controls to the applications.
• Proxy SDK provides complete documentation, API.
• Proxy SDK has samples that are ready to use.
• It has user-friendly tutorials on extending Functional Tester support to test the newly added controls.
• Controls that are available in existing domains can be extended using Proxy SDK.

17) What is the utility of verification points in Rational Functional Tester?

18) What types of verification points are provided by RFT?

20) What is the helper superclass in RFT?

21) How to implement a customized Super Helper?

22) What are the possible Object Recognition Failures and how to fix them?

23) How RFT playback depends upon the platform and the browser?

Test playback in RFT is independent of the platform as well as independent of browser. E.g. we can record script on Windows and play it back on Linux. Also, the script contains no references to the browser during the recording, we can play back the script using any of the supported versions of Firefox, Mozilla, and Internet

24) What host & test platforms are supported by RFT?

25) What types of nesting of objects is supported by Functional Tester?

27) RFT provides how many types of delete Cookies methods?

29) How an application is started during recording the tests?

• When recording tests, the application can be started by using a startApp command.
• This makes playing back the tests more reliable because startApp uses the application configuration information.
• Functional Tester will open either Java applications that we specify or HTML pages in our browser, or run applications in executable form.

30) How can we create a new RFT script without recording?

When we don’t want to do recording, we can create a script to enter Java code manually.
In the new script, RFT includes import statements for files we need to compile the script and comments containing archiving information.
RFT uses the script name as the class name and sets up test Main, where you can add the commands to include in the script.

31) Can we do the recording in an existing RFT script?

Yes. We can do the recording in existing RFT script by bringing our cursor to the desired location & just start the recording. Start the application >> insert verification points >> and add all script support functions.

32) How do we record scripts for testing HTML applications?

For testing HTML applications on a particular browser scripts are recorded in a usual way using following two steps:
i) Enabling the Web browser: Before being able to use the particular Web browser (like any of the supported versions of Firefox, Netscape, Internet Explorer, or Mozilla) to test with RFT, firstly we need to enable it.
Enabling of the browser can be done by clicking on Configure > “Enable Environments for Testing”. This will enable the environments for testing.
ii) Configuring the HTML applications for testing: can be done by clicking on Configure > “Configure Applications for Testing” to specify information about our application and its environment.
For testing Microsoft HTML Applications (MSHTA), we need to run mshta.exe to configure each application desired to be tested.

33) RFT provides how many type of delete Cookies methods?

34) What are the ways of saving test scripts in RFT?

RFT script files can be saved in following three ways:
• Save the current test script or file
• Save all test scripts and files
• Save a script under another name

• Data pool is an external file which drives the Data-driven testing. Data pool provides inputs to the test.
• Data pool is a test dataset or a collection of concerned data records which supplies data values to the variables in a test script during test script playback.

36) How many types of data pools are there?

37) How do we create datapools in RFT?

A data pool is a test dataset, a collection of related data records which supplies realistic data values to the variables in a test script during test script playback.
We can create data for a datapool right from the scratch or we can import existing data into a new datapool from another RFT datapool or from a .csv file.
Following rules are followed while working with datapools:
• While importing data, we need to import the data into the same RFT project as the test scripts that access the data.
• While importing data from a Test Manager datapool, we need to first associate a RFT project with a Rational project to use the Test Manager datapool.

38) What type of changes we can do in a datapool?

39) How do we replace literal values in a script with datapool references?

40) How many types of datapool record selection orders are available in RFT?

41) What are the steps involved in test development phase using RFT?

42) What are the steps involved in the regression testing phase using RFT?

The regression-testing phase consists of following five steps:
• Restore the testing environment and set the playback options.
• Play back the test script against a new build of the application-under-test.
• Analyze the results in the Functional Tester log. If we associate a Functional Tester project with the current Rational project, we can analyze the results using the Test Log window of Test Manager.
• Use the Functional Tester Verification Point Comparator to determine the cause of verification point failures. If verification points fail because of intentional changes to the application-under-test, update the baseline data using the Comparator.
• If necessary, revise your test scripts to use new features in the application under test. Then play back the revised test scripts against the current build and reevaluate the results.

43) What is the purpose of Playback Monitor in RFT?

When we do the playback of our script, we can view the script name, the number of the line that is executing, status icons, and a description of the action in progress from the Playback Monitor.
The Playback Monitor consists of following four parts:
• Script name
• Description of action in progress
• Status icons
• Script line number
• Stop and pause or resume buttons