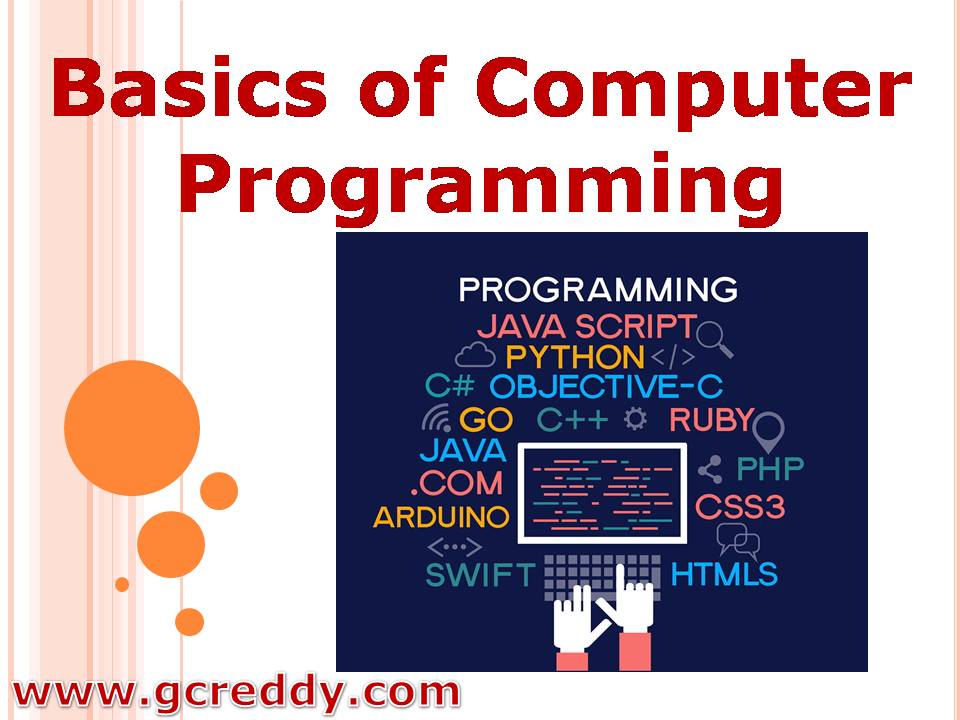 What Is Computer Programming?

1. What Is Computer Programming?

Computer Programming is used to develop System Software and Application Software, In addition it used to write Automated Test cases, and perform other tasks.

Programming Environment is required to write and execute programs,

1. Editor to write and edit programs,

2. A compiler/interpreter that converts instructions into a machine-code or lower-level form so that they can be read and executed by a computer.

In a general sense, a programming environment combines hardware and software that allows a developer to build applications.

Developers typically work in integrated development environments or IDEs. These connect users with all the features necessary to write and test their code correctly.

Syntax in computer programming means the rules that control the structure of the symbols, punctuation, and words of a programming language.

Keywords are predefined, reserved words used in programming that have special meanings to the compiler. Keywords are part of the syntax and they cannot be used as an identifier.

Every programming language defines a basic set of components that can be reused by programs. Every implementation of the language should provide these components. This set of reusable components is what we call a standard library.

Comments are text notes added to the program to provide explanatory information about the source code.

Statement in a programming means any line of code that instructs the compiler to perform a specific task.

A data type is a classification of data which tells the compiler or interpreter how the programmer intends to use the data. Most programming languages support various types of data, including integer, real, character, string, and Boolean.

Variables are the names you give to computer memory locations which are used to store values in a computer program.

Operators are used to perform operations on variables and values.

The statements inside your source files are generally executed from top to bottom, in the order that they appear.

In computer programming, control flow or flow of control is the order instructions, statements, and function calls are executed or evaluated when a program is running.

Selection means we do one of several alternatives. Often done with an “if” statement.

The string is a sequence of characters and it may contain Alphabets, Numbers, and special characters.

String is a data type in computer programming, it may contain a single character or word or sentence.

The most important data type is numeric data. There are several different ones.

An integer is a numeric value without a decimal. A number with a decimal is referred to as a decimal, a float or a double.

A character is a single visual object used to represent text, numbers, or symbols.

A data structure is a named location that can be used to store and organize data.

A static data structure is an organization or collection of data in memory that is fixed in size.

Exception handling ensures that the flow of the program doesn’t break when an exception occurs.