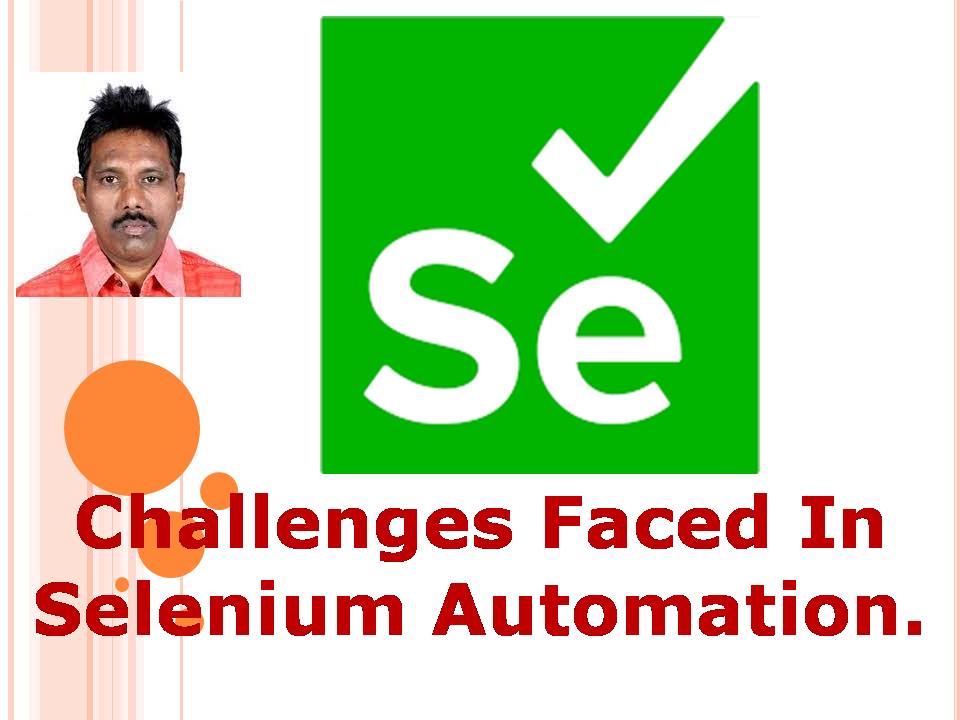 Captcha and OTP cannot be assumed or predicted as its values are different every time it is generated, becomes challenging for automation testers.

This can also be considered as a proof that an application cannot be 100% automated and manual testing cannot be avoided.

Sometimes our web application may not respond the same in different browsers, and there might be a possibility that our website works fine on Chrome but not on Firefox.

Since there are plenty of browsers in the market nowadays, performing test automation on every browser might not be possible.

Automating such web applications becomes challenging with Selenium since the locators that we have used might fail to interact with the web elements.

Web content based on AJAX sometimes takes time to load, which also becomes a possible reason for test script failure.

Different types of popup and alerts occur while interacting with a web application, theare is a difficulty in handling the issue of native pop-ups.

We can handle some type of Popup and Alerts, but not all types,

For the Chrome browser, Chrome Options can be used. Similarly, for the Firefox browser, Firefox Options/Firefox Profile can be used.

Reporting plays a vital role in the testing phase. Tests reports act as a bridge between developers and testers. As of now, Selenium doesn’t provide much reporting capabilities.

Generating and maintaining reports is the critical challenge faced by automation testers.

Tests are said to be flaky when they don’t give consistent results each time that they are run. They pass sometimes and fail the rest of the time. Flakiness in the test happens due to many reasons.

For example, a UI element being validated is dynamic and takes some time to appear on the screen. It sometimes appears on time and sometimes it takes longer and by that time the test reverts it as a failure.

Whether you call it a timeout or sync issue, it is one of the most common challenges in Selenium test automation. If you don’t handle this issue carefully, most of your testing script might fail. It is even proved many times that around 80% of scripts fail due to improper sync while executing automation testing.

Some of the web pages in a web app are user-specific and load different elements depending on the user. Some features even appear based on the user’s previous activity. So some times selenium tests may not perform properly.

Selenium provides you the ability to test your web app in multiple tabs, but this functionality can turn out to be an obstacle if you don’t know the exact commands.

Since Selenium is open-source and we all are using many open source software like TestNG, Maven, Jenkins, Extent Reports, etc. so integration between these tools is sometimes a very challenging task.

As we all know that locators are the core part of any scripting and we need to keep on enhancing our xpath and css for script stability, because if xpath and css are not proper then chances are very high that script might fail in upcoming releases.

We always work for the framework but framework designing and maintenance is not a one-day activity, we have to keep on adding new features or libraries so that we can minimize execution time and maintenance task.