First Learn Python to Start Your IT Career

First Learn Python to Start Your IT Career…

If you are new to Programming then first learn Python, or already know some programming, or testing, or networking or some other technology in the IT Industry, then also learn Python, It improves your career.

Python is a general-purpose interpreted, interactive, object-oriented, high-level, open source programming language. It was created by Guido Van Rossum in 1989, but publicly released in 1991.

Python and all the necessary tools are available on all major platforms.

Basic understanding of Computer Programming terminology and of any of the programming languages is a plus.

How is Python Used?

Python can be used for nearly everything.

Majority of web applications and platforms rely on Python, including Google’s search engine, YouTube, and the web-oriented transaction system of the New York Stock Exchange (NYSE).

Python can also be used to process text, display numbers or images, solve scientific equations, and save data.

Easy-to-learn – Python has few keywords, simple structure, and a clearly defined syntax. This allows a Person to pick up the language quickly.

A broad standard library – Python’s bulk of the library is very portable and cross-platform compatible on UNIX, Windows, and Macintosh.

Interactive Mode – Python has support for an interactive mode which allows interactive testing and debugging of snippets of code.

Portable – Python can run on a wide variety of hardware platforms and has the same interface on all platforms.

CPython
CPython is the reference implementation of Python written in the C programming language.

Jython
Jython is an implementation of the Python programming language that can run on the Java platform. Jython programs use Java classes instead of Python modules .Jython compiles into Java byte code, which can then be run by Java virtual machine.

(The ultimate goal with DevOps is to automate each task in the development life cycle to save time. With python modules and libraries we can do automation using the tools and scripts written in python.)

Note: Python can be used with Selenium, and Appium for Automated Testing.

Note: You can download PyCharm IDE, Install it, set python executable in PyCharm, and use PyCharm IDE to write & execute Python programs. Python IDLE is best for learning purpose, and PyCharm IDE for realtime.

If you want to use Eclipse IDE for Python then you need install pydev plugin for Eclipse IDE. 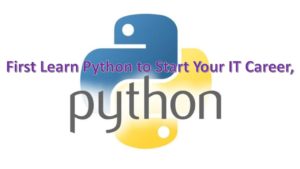 First Learn Python to Start Your IT Career